I went to the wall today, as I always do when I visit Douglas, Arizona. I mean the wall between the US and Mexico. Yes, there is already a wall there. Some people call it a fence, but it’s an awfully rigid, tall, and obstructive “fence.” It is really a wall. In some places, it’s even a double wall. 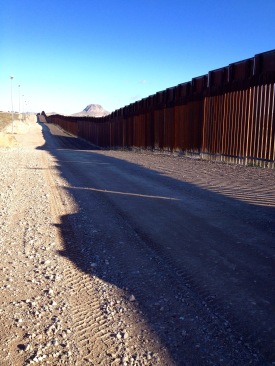 Usually going to the wall is one of the first things I do, but this time I postponed for a couple of days. I wasn’t resisting it, exactly, but in some ways I wanted to put my attention elsewhere first. I wanted to be in the community, with people, for a while before taking the walk to see and touch the barrier that is ever-present in this town.

I have been working to be intentional about the wolves I feed and the plants I water.

This morning I talked with the mayor of Douglas, 32-year-old political newcomer Robert Uribe. Robert and I met a couple years ago, before he became mayor, when he was running a coffee house whose real mission was bringing the community together for music, dialogue, art, and connection. Today was the first time I had talked to him in person since he has taken office.

One of my take-aways from our conversation today was the reminder to focus on communities, to get involved in things we care about, and to resist the temptation to focus primarily on fear and chaos.

As mayor, Robert is focusing on developing the Douglas Port of Entry – something that would help his city economically, as well as the region, and ultimately the country, as it could manage (and police) the incoming goods more easily. He is also focused on developing arts and culture – if those things are thriving, the community of Douglas is strengthened through connection and shared expression; and tourists would bring more money into Douglas.

A farmers market could provide delicious, nutritious, affordable food (and income for local farmers). Art walks, and music or dance performances raise involvement, ownership, and pride in the community (as well as connections between neighbors). Maintaining or updating historical sites can both develop local pride and bring in tourists. Downtown landscaping can bring a sense of beauty (rather than desolation or stagnation) to the town. And on and on.

These are some of the things Mayor Uribe is focused on, here at the border.

These are not the things a lot of people think of if they don’t actually live here. They may not remember that the border is made up of communities, with families growing and working together, neighbors enjoying each other, shared concerns about jobs and healthcare, poets and musicians looking for outlets, parents wanting the best education for their kids.

After my meeting with Robert, I had brunch at the Gadsden Hotel – a gorgeous old building with high ceilings, marbled columns, and stained glass panels of desert scenes. The hotel is a treasure in this city of 18,000 – a treasure it is easy to walk past in a downtown that has struggled to keep storefronts filled. 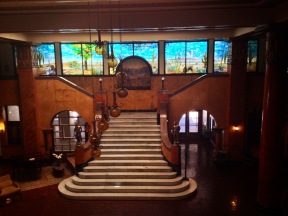 The hotel, to me, is a symbol of the border. From far away, or even up close if we aren’t paying attention, we might miss the gems, the possibilities, the beauty, the history – and the fantastic Thursday lunch special that always sells out.

Robert had a meeting today with the Border Patrol. The mayor of Agua Prieta, the city directly on the other side of the wall, joined him. They work together. When we don’t live at the border, we can forget who our neighbors are – that we are, in fact, neighbors, and that we can work together.

In the past months, I have felt discouraged, angry, and afraid about some ways in which I see our country going on a national level. Those things haven’t gone away, but I have slowly turned the majority of my focus to the work that needs to happen, and particularly the work that I can do. I am looking for the wolf I want to feed, and letting the others starve.

So when I visited the wall today – a short walk of 9 blocks from where I’m staying – I had a slightly new sensation. The first time I visited almost 4 years ago, I was overwhelmed by the symbolism, the blatant message of “Keep Out!” that the wall projects. I was saddened and angered, and saw the whole system holding up this wall, reiterating a message of divisiveness that reverberates throughout our country in different ways.

Today, I had a strong sensation of, “You know what, Michelle? This is an object. It is just an object.” We can transcend the wall, the object of the wall. We are human and have, in many ways, more power than a wall – particularly together.

My friend Jack talks about the people in the Arizona desert who have died trying to get to a place to make a better life for their families. It is tragic – and also, he says, they are heroes. They have said, “No. I refuse to accept the abuse, the limitations, the violence, the poverty that has been forced on me. I will take this situation into my own hands and try to make things better for myself, my spouse, my children, my parents.” They are dying for a cause. In theory, we admire people who commit themselves to a better life; who are willing to risk death for their families.

They are more powerful, in some ways, than the wall.

Tonight I found myself with a group of people in Douglas discussing the same concerns I’ve heard in Indiana, Illinois, Oregon… concerns about education, healthcare, safety. They talked about cooking classes at the food bank, tutoring kindergarten kids, growing gardens.

They are there, next to the wall.

On Saturday, I will be attending a binational concert. People will sing and play music on both sides of the wall – to each other, and WITH each other.

This concert will transcend the wall.

The wall is an object.  Humanity is strong.

The wall represents fear, an attempt to control, an abuse of power. It is also, as a friend of mine said upon seeing it, so childish in some ways – like kids in a car who get angry if their sibling crosses some imaginary center line down the middle of the back seat. It is sad, it has separated families, and it has caused so many deaths. It is tragic.

And it is also an object.

We can continue to look for ways to transcend the wall, to find each other, to seek wholeness in our communities.

The borderlands have a lot to teach the rest of us.

The borderlands can remind us of hope.

We can transcend the wall, remaining focused on our own work, in our communities and families. We can reach across the wall. We can remember that we need each other, even (and especially) beyond walls.

The wall is an object. And we can be more than that object. 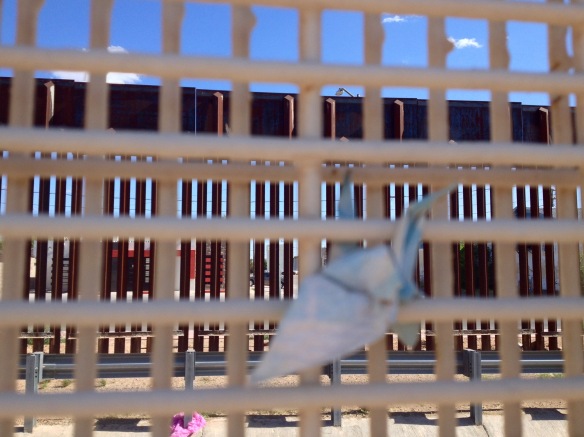 1 thought on “the wall is an object”