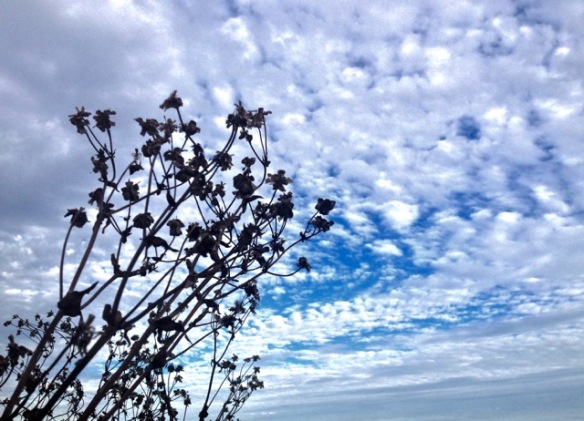  
I tend to commit to something, or to the first/next step of something, and then figure it out. Kind of like what I’m doing with One Thing a Day. I named it, then began figuring out what it is. So far, what I know is:

My original intent was to give myself a little more creative structure as I was recovering from surgery. A friend was talking to me about some of the limitations I’ve had to navigate. She said encouragingly, “Well, you’re writing a lot!” And my response was, “Writing is all I can do right now.”

This was a few weeks ago, when I was still pretty limited physically and energetically. Writing was something I could do at any time, without needing to physically exert myself, and I could limit what I did to what felt feasible.

I wasn’t sure how I would structure this practice, exactly. It could be based around taking walks (as I’ve done before), or some similar task I could set for myself. But I didn’t necessarily want it to be specifically about walking this time.

Turns out, I have gone on at least one walk a day since I started this project. However, by not basing the project on those walks, I have more latitude in my writing. I can be more responsive to each day’s thoughts and activities.

And by not immediately declaring it specifically a writing project, I’ve also been able to get to the deeper intent of creating something – sometimes a drawing, sometimes a photo, and a couple of times it has been a response to someone else’s work or words.

One Thing a Day lets me listen to myself and respond to where I am, within parameters; it allows me to set healthy limits, and to also keep moving forward.

I didn’t originally commit to this, but it’s where I’ve landed.

The practice of posting things publicly forces me to say it’s “good enough,” even when I’m slightly embarrassed, or would like to tweak a couple more things but I’m running out of time, or sometimes even want to throw the whole thing out and start over.

I think as humans we’re pretty good at finding excuses for not finishing things. And not finishing the process is not good for me, or for my writing. I get stuck, in more ways than one.

That said, if I had committed to the public sharing aspect up front, it might have felt too scary and overwhelming. I might have sabotaged myself before I really began. I had to let myself make that decision as part of the process.

This is a phrase I learned from the director Anne Bogart; one that has influenced me in larger ways than I have time to write about here.

One Thing a Day is about listening to myself, my day, my surroundings, and responding.

I could have defined this project in more detail up front, when I began it two weeks ago. But letting myself figure it out as I go has let me adapt and change the practice as I learn from it. This is how I work best. Creating paths by discovering; making something by doing it. Paying attention, and responding.

Making the decision to share something every day, no matter how rough or revealing it feels, is a risk. A tiny risk, and one that I can take. That means I get daily practice in taking (manageable) risks.

I show up, and take one step. A practice of steps that lead to the next, and the next.

Choose a direction. Say you’re doing something. Something small, or just one step to begin, something tiny. You may not know the route, the way, the exact process or steps. You may not even know exactly where you’ll end up. But you can commit to a direction, the next step. Say you’ll do it, then find your way. Articulate something into existence.

I’ve committed to do this for a month, Oct 17 – Nov 17; committed to generating, sharing, risking, and responding. One Thing a Day, one thing at a time.